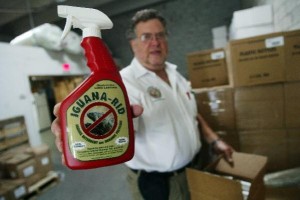 Iguana-Rid, LLC is a privately held company located in Pompano Beach, Florida. It was started in 2009 by Mark Streisfeld and Michael Pikman.

Iguana-Rid, the product, was developed in the beginning of 2009 by Mark Streisfeld in response to the need for a deterrent that would work on non-native iguana’s in South Florida. Months of research and development as well as extensive testing finally produced a unique and viable product. Iguana-Rid, LLC was formed, start up capital was acquired, and production commenced. All aspects of product licensing, packaging, labeling, insurance, and logistics were accomplished. The product was introduced to the market place in June, 2009 and placement was made in several retail outlets. Being the first and only product of its kind, this eco-friendly, organic iguana-deterrent and organic pesticide took off at a rapid pace. Due to its uniqueness, media coverage in South Florida caused sales to increase rapidly.

It was found that the Iguana-Rid formula is effective in deterring many additional animal pests. Some of them include: snakes, frogs, bufo toads .curly-tail and other lizards, squirrels, rabbits, ducks, geese, deer, raccoons, skunks, and many more. The bio-pesticide activity impacts hundreds of bug species some of which are: mealy bugs, beetles, white flies, leaf chewers, thrips, aphids, spider mites, snails, etc.

The success in deterring so many varied animal pests prompted the creation of the new label, which would allow sales throughout the U.S. and other countries. Pest-Rid, the Organic Animal Pest Chaser, a registered, patent pending product is now available for distribution. In addition to the liquid spray product, a granular form has been produced. Pest-Rid Golden Granules is a great addition to the product line.

In early 2012, seeing a growing problem both in the U.S. and worldwide, Bed-Bug-Rid was launched as natural and effective solution to both treat and prevent bed bug infestations.  Supported by multiple independent laboratory tests, Bed-Bug-Rid has been featured on QVC and currently being placed in numerous retail locations around the country.

Iguana-Rid, LLC is selling product on many internet sites, such as Amazon.com, Homedepot.com, Staples.com; Sears.com, etc.  We sell to distributors all throughout the Caribbean and as far away as India.

Iguana-Rid, LLC recently moved to a larger office and warehouse  in June, 2014.  We have new products being manufactured and will launch early this year.  Jungle Flora Paks, an organic growth accelerator for everything that grows and Happy Shine, a one step cleaner-polish that resists dust and dirt, are being marketed in several ways.

I will never travel without it..

“What a great product. It is so frightening to be exposed to Bed Bugs and feel so extremely vulnerable. I thought living in a big city was the problem. Then I learned that anywhere can be a problem. Our urban bugs were transported by a moving van to the country.

Bed Bug Rid is a wonderful antidote. It is natural, smells like cinnamon, easy to buy and better yet apply and it WORKS. Be safe and prepared..

I will never travel without it..”
Would you recommend this product as a gift? Yes Who would this be a perfect gift for? Families

“I plan on taking this on my travels this summer. I like the idea that it is safe for children and pets. I don’t plan on making bed begs my pet so, bye bye bed bugs.”
Would you recommend this product as a gift? Yes
Who would this be a perfect gift for? Families

Recommend highly to all of my friends and family.

“Has a great scent. Have used many times in my travels. Always feel secure and safe. Recommend highly to all of my friends and family.”

Would you recommend this product as a gift?  Yes

Who would this be a perfect gift for?   Best Friends

Will sleep peacefully knowing there will be no bedbugs visiting me at night.

“I was going on a trip, so fearful of bedbugs at the airport, hotel, and then bringing them home.

Purchased Bed Bug Rid, the 3 oz travel size was great to take, and the other sizes to be used when I got home.

Will sleep peacefully knowing there will be no bedbugs visiting me at night.

Would you recommend this product as a gift?  Yes

Who would this be a perfect gift for?   Families

“When I saw the ad for this product, I already had the critters in my bedroom. They had come from the apartment next door. I live in a 10 floor building and a few other residents complained about getting bit. It took a live bedbug in a sandwich bag given to the building manager to get some action. I ordered Bed Bug Rid from QVC but was put on the waitlist. Meanwhile, the building manager got the exterminators to spray my room and a few others. The biting continued even with them spraying twice in two weeks. As soon as my spray arrived and I used it, the biting stopped. The manager here has now treated every unit since that is the only way to get them. And I still spray my bed and the carpet around it once a week until we are assured there is no longer a problem”

Would you recommend this product as a gift? Yes Who would this be a perfect gift for? Neighbors